Cord Cutting: Should I be Worried?

With the proliferation of great streaming content, most of us find ourselves subscribing to one or more streaming service.  We have also heard the term “cord cutting,” where people are dropping their cable and satellite packages entirely.  I am sure many of you have asked yourself the following question:  Are people still watching Live TV?

The good news for the current television advertisers is yes, people are still watching significant amounts of Live TV.  In fact, the average adult watches almost 5 hours of television content per day.  While it is true that more and more people are cutting the cord and dropping their cable or satellite packages, it is not at the alarming rate as the media would make you think.

Let’s take a quick dive into the numbers to see where we came up with these deductions. 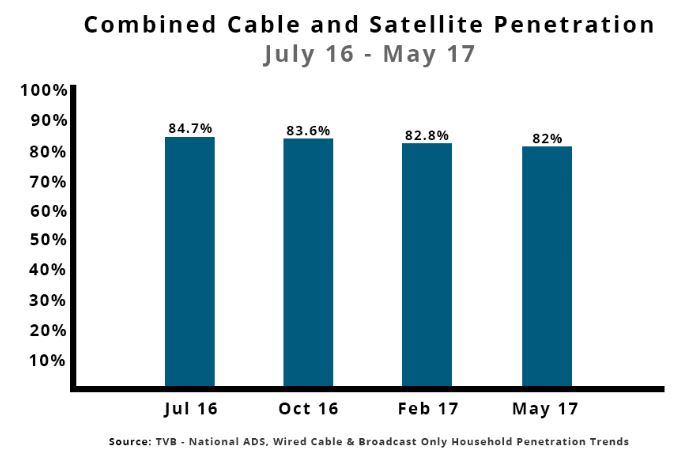 According to the most recent numbers provided by TVB, nationally the number of households that subscribe to cable or satellite (ADS) dropped 3% between July 2016 and May 2017.

According to the recently released Nielsen Total Audience Report for Q1 2017, time spent viewing TV has also dropped at an almost identical rate of 3% YOY.  However, TV reach is growing, and the percentage of adult viewers that use TV has gone up in all adult demos.  This means that more people are watching television content but watching slightly fewer total hours than last year.

It is important to remember that even if people are cutting the cord, they still have access to local broadcast television (ABC, CBS, NBC, FOX, etc).  Most modern televisions include built in digital tuners which allow cord cutters to still view this content in high definition.

In this dynamic marketplace, it is important that you select your agency partner wisely.  Be sure to ask if your agency subscribes to 3rd party rating data, so they can negotiate your television schedule based on the viewers your schedule actually has, not just what the vendor says the content is worth.