While flying cars may still be far in the future, self-driving vehicles – a once outrageous idea – may become commonplace before the decade is done. Electric vehicles, while not as futuristic as their autonomous counterparts, are already gaining momentum in the market.

Some predictions show EVs dropping in prices and increasing in popularity over the next two to eight years, reaching a crucial turning point by 2024. Both legislators and automakers are working to meet this goal, with infrastructure changes and affordable vehicle prices necessary for consumers to embrace an EV-driven future. 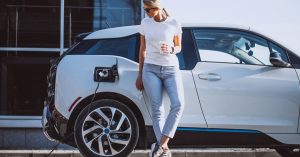 Chinese automakers now employ the most advanced technology to customize drivers’ experience behind the wheel of their electric cars. Facial recognition software uses in-vehicle cameras to identify the driver. It can identify adjusting the seat, steering wheel, and lighting to pre-specified settings. A custom avatar even offers dining options if the driver says they’re hungry!

Plus, Chinese automakers have made charging more convenient. China offers valet charging services that drive the electric vehicle to a charging station. It charges during work hours and returns it by the time drivers clock out.

How Soon will Autonomous Vehicles Be Ready

Some studies show that about 94% of car accidents are caused by human error. Autonomous automakers consider their cars to be a possible solution, reducing crashes and fatalities. But autonomous vehicle manufacturing is costly – from design and testing to production.

That’s why many companies are teaming up. For instance, Ford and Volkswagen are working together in a billion-dollar deal. But when can drivers expect to see the fruits of their labors cruising down the street? Some sources estimate that autonomous vehicles will really start gaining momentum by as early as 2028!

In fact, self-driving cars are already on the road in some states. The Colorado School of Mines has replaced diesel-powered buses by nine self-driving, zero-emission vehicles to transport students and staff around campus.

We specialize in marketing for automotive advertising, healthcare advertising and legal advertising. To learn more, get in touch with us today! As we look toward a fuel-free future, we’d love to discuss the future of your car dealership as well. Contact our advertising agency today!