Anna Greeley was named M2’s World’s Best Person of the Month during our August staff meeting. As a relatively new member of Team Media, Anna has fearlessly stepped in and stepped up as an incredible asset to the agency. As our second media team member named Anna, she’s even tolerated and embraced her new nickname, AJ, short for “Anna Junior.” Despite the shenanigans, she’s taken it in stride and M2 is so grateful that she’s part of the team. To reward her, we will pepper her with stupid questions. 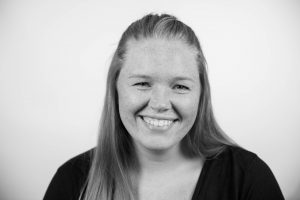 Q: If you had to watch one movie every day for 3 months, what would you watch?

This might be the worst answer of all time, but I would choose What a Girl Wants. I think I already watch it once a week as it is

Q: What is your favorite advertisement of all time?

I have a lot of favorites, but the first that comes to mind is the Coca-Cola Share a Coke. They have the best feel good commercials and I love the common theme of bringing everyone together. I’m a sucker for the soft stuff!

Q: When you were a kid, what did you want to be when you grew up?

As a kid I wanted to be a pilot. I even took a few flying lessons!

Q: Who are you rooting for this Football season?

Since my alma mater doesnt have football, Ill be rooting for the Clemson Tigers all the way! #solidorange