Hearty congratulations are due to our first World’s Best Person winner of 2016! Ryan, our Content Strategist, took the honor this month for his ability to create on demand and maintain an incredible attitude in the crunchiest of crunch times.

Our hats are off to Ryan! Now, let’s get to know him a little better with some Q & A.

Q: If you could pick any restaurant in Charleston to have dinner at tonight, which one would you pick and what would you order?

I would go to Husk, and I’d order whatever was on their daily menu. That place isn’t just a restaurant, it’s a Southern institution that pays homage to one of the world’s greatest cuisines.

Q: What is the most annoying sound in the world?

A child crying. But…hear me out. I understand that babies cry when they’re trying to tell their parents they need something…like if they’re hungry or if they don’t feel good. That’s all they’ve got to work with, so you can’t be mad at that. The kind of crying I can’t stand is coming from that kid in the mall that’s crying because their parent won’t buy them ice cream.

(Editor’s note: yeah, that annoys the parents too – trust me)

Q: What was the last picture you took with your phone? 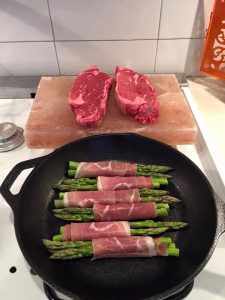 This is the last picture I took on my phone. I was really excited to try out the new Himalayan Salt Block I bought earlier that day, and decided to take a picture after I finished doing all my prep work. Ironically, the day after this photo was taken I decided I’d try being vegetarian. It’s only been a few days, but I haven’t broken yet!

Q: What is the lowest dollar amount you would accept in order to agree to eat a bowl of cockroaches?

Q: Which is the better invention – A dog muzzle that looks like a duck bill or a kitchen utensil that makes hamburgers shaped like hot dogs?

Definitely a kitchen utensil that makes hamburgers shaped like hot dogs. I would totally buy a hamdog from a food truck, if I wasn’t vegetarian.