When we’re not tweeting, Instagramming, or PPC-ing, we’re usually submerged in digital/social trends (and a box of wine). We do the research so you don’t have to. Here are some updates from our digital media bubble:

Google Expanded Text Ads ARE HERE. Thats right! The days of painstakingly counting the characters in our clients names are no more. Sort of. Instead of the typical 25-character headline and two sub-lines of 35 characters each, we now have TWO headlines of 30 characters each AND an 80-character description. Screenshot below (and in the article if you’re adventurous). The switch was aimed specifically at mobile users who want more information at their fingertips, but the change benefits desktop and tablet users as well. 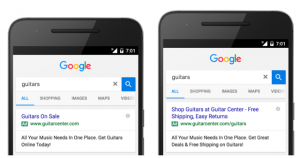 Payday Loans Banned From PPC. Officially, as of last week, Google will not support paid search ads for any payday or high interest loans, loans that require repayment in full within 60 days, OR any APR over 36%. This is a roll-out that is taking time, so you may still see some ads show whilst doing some quick searches, but Google wants to carefully review each advertisers terms & conditions before disapproving the ads. This policy is designed to protect Googles users.

Facebook Targeting Infographic. This is more for the nerds in the room, but if you ever want a handy infographic on all of the capabilities we have with Facebook ad targeting, then look no further. Also feel free to simply swing by our offices with Taco Bell & we’ll answer all of your questions.

Pokemon Go Sponsored Ads? The first sponsored PokeStops have rolled out for McDonalds in Japan. What does this mean if you arent catching them all? PokeStops are pinned locations within the game that a user must travel to in order to collect Pokeballs, potions, or to drop a lure (attract more Pokemon). Therefore, this could be a lucrative way to drive foot traffic into a business and exactly what McDonalds is hoping to achieve. Dont get too excited, as this functionality isn’t yet available in the United States and the ability to have these sponsored locations is based on the popularity of retailers/restaurants. #TeamMystic

Social Media & The 2016 Election. We dont know about you, but we have been completely fascinated by the role social media has played in this years election. 44% of US adults reported learning about any election updates via social media. In July, 24% of US adults said they went directly to both candidates social pages opposed to their actual websites to keep informed. Trump announced his running mate via Twitter. Clinton announced hers via Twitter. Both conventions were streamed LIVE via Twitter in the last weeks. Election news snippets from CNN are playable via Snapchat. The entire debate over Melanie Trumps speech unfolded via social media and was initially called out via Twitter specifically. No matter your party affiliation, you cannot argue that social media has been a huge player in the election. If you still don’t think social media is important, we can’t think of a bigger stage to help convince you.

Interested in learning more? Need help with your digital or social media strategy? M2 is here to help. Email us any time at info@motivatedmarketing.com.