What Advertisers Expect from Primetime Programming in the 2015-2016 Season

Its no surprise to TV fanatics like us that the 2015-2016 prime programming schedule will feature a solid lineup of new shows as well as returning favorites. The big trend this year is that many of the new shows being released will continue to ride the wave of action and superhero movies that have flooded theatres over the past several years. Case in point: near the end of the 2015 season well see new comic-based shows like Supergirl replacing older traditional sitcoms that are entering final seasons such as The Big Bang Theory. Heres a rundown of the 2015-2016 fall schedules of TV Broadcast’s Big 4 (CBS, FOX, ABC, NBC) and The CW:

ABC’s prime time programming will remain fairly similar to the schedule it’s kept in the past. In regards to ABC making minimal changes to its primetime schedule, Paul Lee, president of ABC Entertainment, says “Its our usual balance of stability and real ambition.” The network has thrived in the past but according to Lee, there is still room for future growth due to the network’s brand of smart, emotional, inclusive storytelling. Some showtimes will change to make room for new shows such as The Muppets, and in midseason when shows take small breaks, we will see the premiere of new shows like The Catch, The Family and Wicked City. The show that’s making the most noise is The Muppets which premieres Tuesday September 22. Source: http://goo.gl/D1Xf9A

CBS announced that they will debut three new dramas along with two new comedies. They have also stated that the network has one of the most stable lineups on television, with 22 primetime series set to return. The dramas will include Code Black, Limitless, and Supergirl and the debuting comedies will be Angel from Hell and Life in Pieces. CBS will continue to be the go-to station for your CSI and crime shows, like the returning series NCIS (New Orleans and Los Angeles), Blue Bloods and Criminal Minds. CBS’s prime programming will also continue to heavily follow the NFL with NFL Thursday Night Football as well as the Super Bowl 50 set for February, 2016. DC Comics’?Supergirl is one of the highly anticipated shows that premieres October 26. Source: http://goo.gl/EiQjLo

On NBC we will continue to see the emergence of new shows along with popular returning series during the fall season. Chairman of NBC Entertainment, Robert Greenblatt, said, “We’re attacking the new season with the same programming strategy that successfully turned NBC around; a slate of provocative and innovative series and events that cut through the clutter and will continue to build on our momentum.” NBC will continue to broadcast popular series which include shows like The Voice and Chicago Fire. Although NBC has struggled to produce successful half-hour comedies in the past, we will see them try again this fall with new shows like Coach and People Are Talking. They will also premiere new drama series such as Blindspot and Chicago MED while resurrecting Heroes with Heroes Reborn. The debut of Blindspot will be September 21. Source: http://goo.gl/uyxZai

Fox, the last of Broadcast TV’s Big 4, will also be letting some unsuccessful shows go in favor of debuting some fresh programs. The NY Times says that “As it did with Sleepy Hollow and Gotham, Fox is picking up shows that were inspired by movies and books, including Minority Report, based on the movie with Tom Cruise, and Lucifer, based on a DC comic.” Fox will also continue to broadcast Empire, the series that premiered last year and had everyone talking. Tuesdays on Fox will be all new this fall season with new comedies like Grandfathered and The Grinder, followed by the all new comedy-horror series Scream Queens. The new comedy with John Stamos, Grandfathered, is set to premiere on September 29. Source: http://goo.gl/DHqKpB

We cant forget the network that is an unofficial member of TV’s Big 4 networks, The CW. The CW’s fall season will return with many of the same popular shows that have been airing over the years. There will only be two changes to The CW’s lineup which consist of DC’s Legends of Tomorrow and on Mondays, Crazy Ex-Girlfriend. Legends, which is a spinoff from Flash, which is a spinoff from Arrow, will air midseason although?a premiere date has not yet been announced. It will include characters that cross over from those shows and there will be crossover episodes as well. One series that will undergo a small change is Reign; Mark Pedowitz, president of the CW, said “…moving Reign from Thursday to Friday will get it away from competition with ABCs Scandal.” Despite the loss of main character Elena in The Vampire Diaries, the network still expects the show to do well in the fall. In all, The CW’s prime time schedule should remain fairly similar to years past. The highly talked about Legends of Tomorrow premieres in 2016 (though an exact date hasn’t been announced). Source: http://goo.gl/HZO0Cx

While there will be minor changes taking place on each of the major networks, all five expect to have successful 2015-2016 seasons. Being the media geeks we are, we’ve included the ratings for the 2014-2015 season below for reference. Only time will tell how the 2015-2016 season will compare. 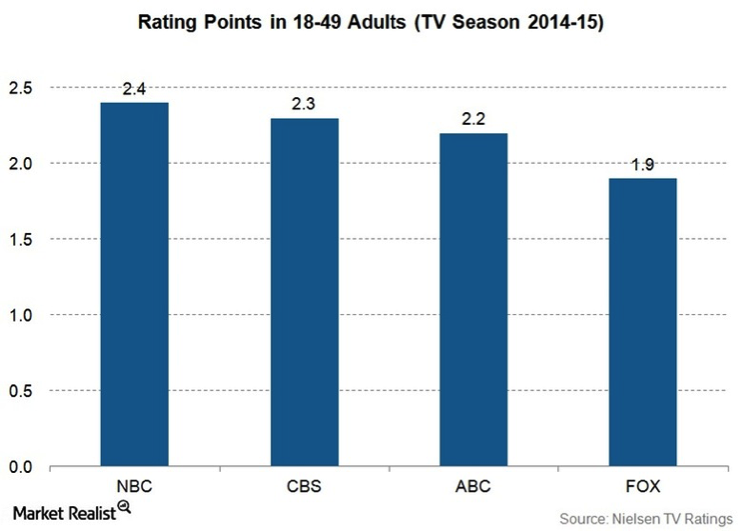 Prime time ratings for Broadcast TV’s Big 4, based on rating points by adults ages 18 to 49. Not included on the graph is the CW coming in fifth with 0.8. Source: http://goo.gl/GYdMlK

If your business is?interested in buying media during the 2015-2016 seasons, please feel free to contact us. Motivated Marketing’s team of Media Experts is notorious for negotiating added value on our clients’ behalf, and would be more than willing to help your business do the same.